For our first interview, I asked Howard Garrett from Orca Network to answer some questions. Howard Garrett and Susan Berta founded Orca Network in November of 2001. Orca Network is a 501(c)(3) non-profit organization dedicated to raising awareness about the whales of the Pacific Northwest, and the importance of providing them healthy and safe habitats. A community is emerging that is increasingly attuned to the orca population, that cares about and tries to understand the needs of the Resident and Transient orcas that inhabit the Salish Sea.

Q: First, will you tell me a bit about yourself?

A: With a degree in Sociology I began working with the Center for Whale Research on San Juan Island in 1981. In 1995 I began campaigning to return Lolita/Tokitae, a So. Resident orca captured in 1970, to her home waters in Puget Sound. In 2001 my wife Susan Berta and I founded Orca Network. I give presentations on orca natural history, conservation and captivity issues in Washington and beyond for students and community organizations, and for media for stories about orcas, including in the film Blackfish in 2013.

My interest is mainly in the natural history of the species, how and where field research is being done to find out more about them, and the emerging picture of diverse orca populations worldwide. Our focus is on the Southern Resident orcas of the Salish Sea and coastal waters, now down to only 72 members. Their diet has been primarily Chinook salmon for millennia, but those king salmon are scarce these days, and the orcas are barely surviving. I’m interested in why Chinook are so crucial to their survival, and what we can do to help them find more of their specialized sustenance.

A: It was the combination of going out almost daily to photo-ID the whales in the early 1980s, which meant traveling alongside them at low speeds and seeing how variable and yet cohesive their movements are, plus the fascinating results of studies into their complex social systems and acoustic communications. It was a potent brew for my novice mind fresh from sociology studies.

Q: What does the Orca Network mean to you?

A: Orca Network is like my family. We started it over 20 years ago with the premise that orcas are fascinating and deserve our respect and awareness. We hoped there would be enough consensus on those points to support our campaign for Lolita/Tokitae in Miami and our sightings network, along with various events, all of which call for organizational footwork, budget management, timely involvement, and of course relationships with others of a similar heart and mind. Like any family Orca Network has grown and matured over the years so we now have an active board and a half dozen paid staff, and all the obligations and opportunities that come with all that. I’m immensely pleased with our whole team and especially with the support of so many friends, neighbors, and colleagues who also think orcas are fascinating and deserve our respect. We’ve actually become a network for those interested in orcas and other whales.

Q: Why do you think sharing information about these animals is important?

A: Most of the people around the Salish Sea still don’t know much, if anything, about the many whales or any other marine life in the waters surrounding us. The health of these waters has been compromised severely by our industrial activities since the first European settlers arrived, and the whales themselves have been shot, captured and otherwise maligned for many decades. That demonizing of orcas has largely dissipated in the past few decades as a result of people speaking up for them, in the media, in court, and in personal conversations. We’re contributing to and facilitating those conversations, resulting in a wide array of remedial actions underway now to protect the whales’ habitat and food supply.

More immediately, seeing whales, even vicariously through the reports and images provided by others, tends to lift our moods and our outlook on life. Experiencing whales directly or indirectly seems to encourage us to share our stories and feelings, through science, or art, or just talking about them.

Q: You’ve been involved with these animals for almost 40 years, what changes have you’ve seen?

A: I see two questions there. For the whales, I see the accumulated stupidity of our industrial civilization continuing to wipe out ecosystem foundations and toxify what’s left. It’s a tragic indictment of myopic, self-centered philosophies with little regard or awareness of the natural world from which we derive our air, our water, and our food. For the whales that means degrading, depleting, and polluting their food supply, as shown in their inability to reproduce their families sufficiently to survive much longer. 40 years ago the signals were not so clear, and the orcas were recovering from the captures 50 years ago, but by the late 90s it was clear there were big problems causing serious harm to the orcas.

For the people, I’ve seen a huge groundswell of understanding and dedication to address all those environmental insults, and a growing realization that all life is sacred, animated with the wonders of evolution on our small planet, and that whales, especially orcas, are a beautiful expression of the power of life on earth. Our challenge remains to bring those epiphanies into broad enough consensus to become our governing beliefs.

Q: Our guests usually come in with little to no knowledge about Orcas. What do you think is important for them to know?

A: I’m still enthralled with our new understanding that orcas emerged as the largest of the dolphins around ten million years ago with the largest brains on earth and absolutely no predators. They’ve had the luxury of devising ways to live best within the limits of their habitats for millions of years without fear of predators or each other. Orcas, among many other whales and other animals, deserve our efforts to protect them and show our best intentions.

A: To me, The Orca Network gives the community an insight on what they can do to help. What do you think is the most important action for the public to take?

A: All of these actions are helpful: 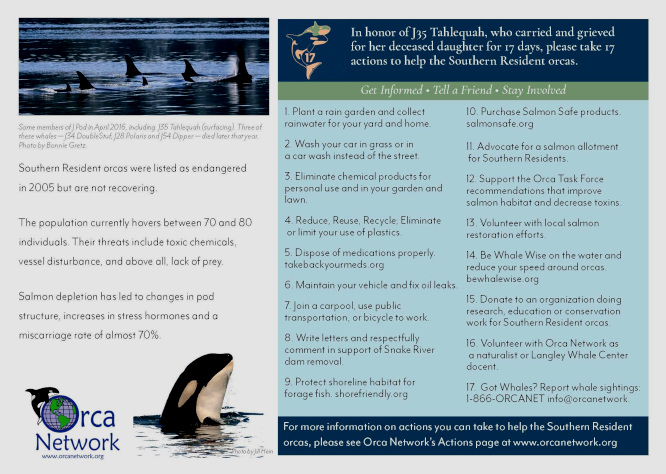 I ask people to focus on #8, the immediate breaching of the four lower Snake River dams, to provide the most adult Chinook into So. Resident habitat in the shortest time.

Brooke grew up spending her time on the lakes, rivers, and forests of Michigan. She graduated from Central Michigan University in 2015 with a degree in Outdoor Recreation and Environmental Science all while spending almost every weekend biking, rock climbing, skiing or ice climbing. She spends her summers guiding for Crystal Seas and TerraTrek in hopes of sharing her love of exploring the outdoors.